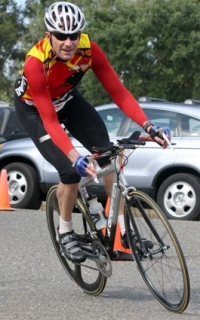 I was born and reared in a little California Danish town called Solvang, near Santa Barbara, and at the age seventeen, I made my first attempt at community college at nearby Allan Hancock College in Santa Maria but failed out. Ages eighteen through thirty-one were comprised mostly of being a radio disc jockey at KXFM and KSYV and then working at Kirkwood Ski Resort. Eventually, I decided to return to school, attending the very same college out of which I failed thirteen years earlier. I transferred to UC Santa Barbara for my BA in English, took a year break to help teach K-5 ESL in North Carolina (at Griffith Elementary School), and then earned my MA in English at Sonoma State in 2001 while working full-time at Larkin Street Youth Services.  I, with a freshly printed graduate degree in hand, immediately started teaching at Allan Hancock College, through which I also taught for Lompoc Federal Prison.  In 2006, I took my show on the road and taught at Porterville College for a year, and then in the fall of 2007, I began teaching at MJC, was fortunate enough to get a tenure-track position the very next year, and have enjoyed helping MJC students achieve their goals ever since.